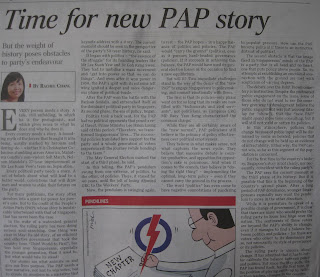 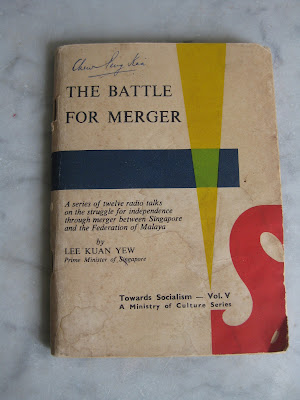 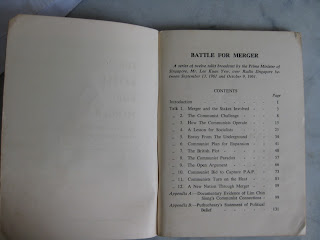 The Straits Times on Monday 5 December 2011 published an article Time for new PAP story.
Paragraph 3 said: "Every politcal party needs a story. A set of belief about what would lead to a better world, convictions that will draw man and women to stake their futures on the party".

Above statement reminds me of the PAP in the early 1960s. The party believed that the only way for Singapore to get independent from the British was through merger with Malaysia. The opposition Barisan Socialis thought otherwise. The PAP worked very hard to win the hearts and minds of the people for merger with Malaysia. The then Prime Minister Lee Kuan Yew gave a series of talk through radio broadcast as well as rallies which were held till very late at night.

I could see he was very tired but it was very crucial for him and the PAP. I kept the little book
"THE BATTLE FOR MERGER" for more than half a century. It consists of a series of talk broadcast by then Prime Minister of Singapore Lee Kuan Yew over radio Singapore between September 16 1961 and  October 9 1961. At that time the domino theory of communism coming from China was very real. North Vietnam had already fallen to the Vietmin communists in 1954 and the war was on the way down towards the south. Fortunately, the US and its allies stopped communism's southward march until the Vietnam War ended in 1975 or the domino theory could have come to pass.

During the referendum majority of the people in Singapore voted for merger with Malaysia. When Singapore left Malaysia in 1965 I was surprised to see in the television that Lee Kuan Yew cried. He wanted Singapore to be an independant country but thought that the British would not let it.

However, he made Singapore's independent a sovereign country, not directly from the British but by a roundabout way.
Many thought Singapore was surely doom but thanks to the PAP Singapore 'Boleh'.
Posted by PChew at 1:35 AM