On Sunday 27 January 2013 friends of yesteryears (FOYers) bloggers met at Kreta Ayer Food Centre for the launching of Dr.Tan Wee Kiat's book depicting stamps of Japanese Occupation from 1942-1945. It also gave us the opportunity to fellowship and bonding.

I remember the first time I met the FOYers was in August 2011 at the Singapore Post Building food centre. The occasion was the lauching of Dr Tan Wee Kiat's book on Singapore bird series stamps and currency. It was there that I met my niece and her husband Yeo Hong Eng a fellow blogger. There was also an elderly kopi kia who served drinks only to our group. You can see him with wide grin in the picture below. He is a jolly good fellow. 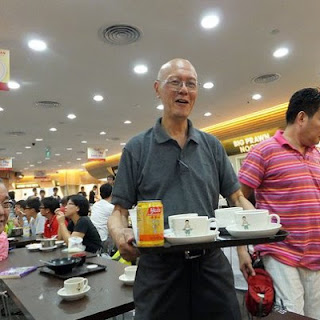 The foyer's next gathering was on 24 September 2011 at the Eunos Bus Interchange coffee stall. Whoever suggested that location should be awarded the number one Star for it was a 5-star place. The site was away from the crowd and we could let our hair down without bystanders staring at us. The two ukulele players were basking without a licence. Someone with good humour put a cap on the floor to collect money for them. You can guess whose cap was used to collect money from the picture below. 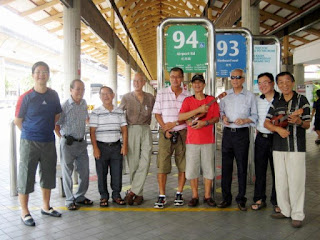 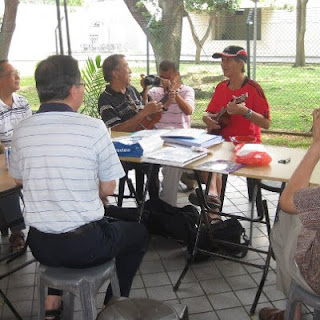 The two musicians played actors. It was the practice session. Chun See was the director sitting in front of them giving directions. Wee Kiat was the assistant director. A video crew was busy snapping away Dick in action. 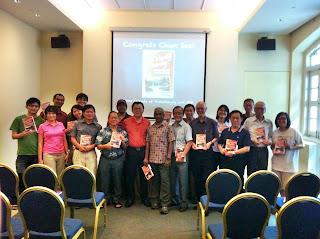 Our friend Lam Choon See of Good Morning Yesterday launched his book on 4th February 2012 at 39 Armenian Street adjacent to Peranakan Museum. It was another opportunity for the foyer to meet. 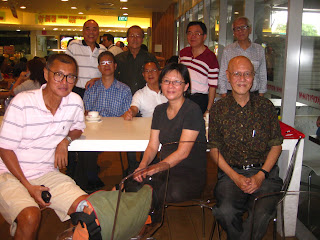 Chang Soh Kiat of Sitting In Pictures and a friend of the FOYers was returning home to Australia. On 25th April 2012 the FOYers gathered at Lavender MRT kopitiam to give her a send-off

Pictures below were taken on 27th January 2013 during the launching of Swee Kiat's book. 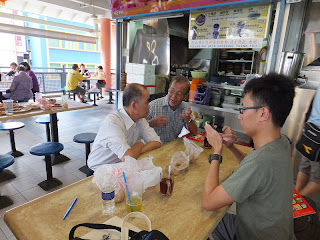 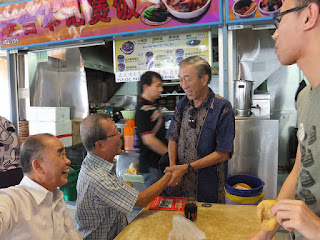 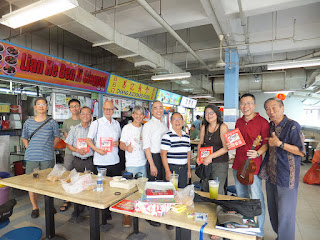 One group photo for remembrance

It appeared that the FOYers met twice a year in 2011 and 2012. This year we already had one recently. I hope we can have one or two more gathering before the year end. Looking back the most memoriable get together was at the Eunos Bus Interchange coffee stall. We were able to have fun singing and clowning around. Nobody bothered us inspite of the noise. Hope our next venue will be like Eunos Bus Interchange coffee stall.
Posted by PChew at 2:19 AM No comments: