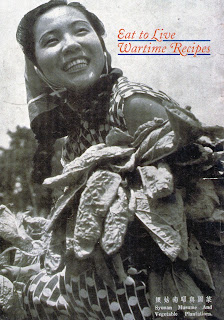 Belinda Tan on behalf of The National Museum of Singapore had kindly invited me to the launch of the DVD, Eat To Live: Wartime Recipes with screening of two episodes Food as Power & Control and Living off the Land. Launching of the DVD was held at the Natioal Museum Gallery Theatre this morning (Fri 7th June 2013). I watch the screening. Some of the scenes and recounts by those who went through the era evoked my memories of the war years. While my mind is still sound I would like to share my experience of those years to others.

When the war reached our shores, I was only six years old. My grandpa moved all his family members to live in his rubber estate at Chai Chee, Changi. The countryside then was considered a safer place than the built up area in Joo Chiat. His rubber factory smoke house and the labourers' quarters were converted into dwelling. We lived in the double storey smoke house while the rest of the family lived in the labourers' quarters a few metres away down the slope. 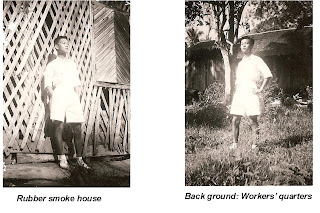 Grandpa also brought along a lot of provisions such as bags rice, flour, sugar, salt and other basic needs. After a few months our provision stocks got less. Fortunately, we did not expect the war to end soon. My mother had already started a small plot of vegetable garden on our land. She planted tapioca, sweet potatoes and assorted vegetables. She had two pig pens for pigs and a chicken coop for poultry.

As time went by we had to supplement our rice with tapioca, sweet potatoes or yam. We need not have to buy the tuber but just pull them out from the ground in the farm. My mother also substituted tapioca leaves, sweet potato leaves and sayu paki ( a wild plant grew by the road side) for vegetables and when cooked with sambal chilly they were excellent. In the market there were dried uncooked sweet potato sticks and yam stick like French fries for sale. Because of rice rationing they became good supplement.

For protein, we had meat from pig and poultry. The pigs kept by my mum were for sale. We bought pork from the market. Before the war eating chicken was a treat. It was eaten only on festivals and celebrations. During Japanese time we could have chicken meal anytime. My mum was very good at cooking sapor chicken rice.

My elder brother was working in a Japanese camp nearby. He left every morning to work but came back with a packet of white cooked rice and a tin of freshly brewed hot black coffee. It appeared that the villagers worked for the Japanese because of the rice and coffee. They were rare commodities. We were a family kopi O. So everybody was waiting for my brother to return home with a tin of coffee. Funny, rice was scarce and nobody made a fuss when he came home with a packet of cooked white rice.

After the invasion and the Japanese administration was stable my grandpa and all his famiy members moved back to live in Joo Chiat. My parents and my sibblings stayed backed except me. My grandma wanted me to be with her. At Joo Chiat there were many hawkers. Job was hard to come by and becoming a hawker was the easiest way to make a living. There were many cigarette make shift stalls. Two empty crates were used as a stand. Cigarettes were displayed on shelves for sale. I remembered the two famous brand - kwa and minami. Kwa was a better brand and cost more.

One door away from my house was an unnamed lane. Every morning both sides of the lane were lined with hawkers selling fish, pork, vegetables etc although two wet markets, Joo Chiat Market and Changi Market were nearby. The fish was very fresh as they came from the fishing stakes nearby Marine Parade as well as from the fishermen in their sampans. I saw at first hand live fish with their gills moving and gasping for air. I also saw live sea horse, crabs and other sea creatures. I did not know where the butchers got their supply of pork. But for vegetables they came from vegetable farms at Ubi. Singapore was fortunate for its small size and also as an island. Therefore, there was no shortage of seafood. For cooking, coconut oil was used. We had coconut trees and my mum made her coconut oil. I had seen her made and it was not difficult.

I remembered there were rationing of bread and noodles at Changi Market. My grandma handed me a ration card and told me to buy the bread. At another occasion I was told to buy the noodles. Each time a different item was on sale for ration card holders. I queue up for the bread although there was a long line. When it was my turn to buy one, I was happy that they still had stock. My happiness was short lived. Our NS boys complained of Safti bread in the 1970s. The rationed bread was worse. It was hard as a rock. When thrown to the ground it did not bounce. I had no idea what kind of flour was used. I had tasted bread made of green beans. It was not bad. Perhaps they were from different bakeries. As for the noodles, it looked like today's yellow round noodles but was coated with palm oil. That spoilt the taste.

The rice we got from ration were broken rice mixed with tiny sands, stones and insects. Before cooking we had to remove all the non rice items. It was not possible to buy whole grain rice, sugar and imported food from the provision shop except by black market. The items were sold at outrages prices.  In Joo Chiat my uncle was working for the Japanese. He too brought back cooked rice and black coffee home after work.

I must admit that our family did not suffer much during the Japanese Occupation. We were able to get by. But, many others had sad stories to tell. The three and a half years of Japanese rule was like a dream. It is now Singapore's history.
Posted by PChew at 4:59 AM 2 comments: