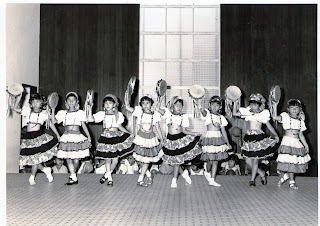 Gypsy Dance at Bethesda Kindergarten
I was searching for some old photos and came across the above picture. My daughter was in K2 Bethesda Kindergarten at Frankel Estate. It was her class graduation day and parents were invited. Before the presentation of Graduation Certificate, her class performed a gypsy dance as in the above picture. This photo was taken in the mid 1960. My daughter is 3rd from the left. I hope to bring fond memories to the girls who are now very close to 50 years old or older. I believe they are mothers and one or two might even be grandmothers.
Posted by PChew at 8:49 PM 2 comments: 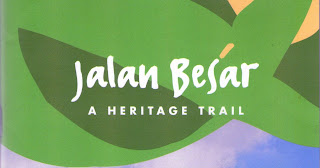 On Saturday 4th August 2012 Dr Yaacob Ibrahim, Minister for Information, Communications and the Arts launched the Jalan Besar Heritage Trail at City Square Mall. I met fellow blogger Lam Chun See as he was coming out of the stage enclosure. He was there as an invited guest. Anyway both of us had fond memories of the area. The quotation below is from him. 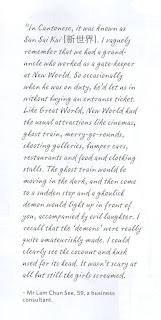 Chun See wanted to turn back the clock  and was trying to locate the former New World Amusement Park side gate so as to have another free entry. I remember the side gate entrance and tried to get my bearing. There was an open canal running along the side of the amusement park. A wooden bridge across the canal led to the side gate. The other end of the bridge led to the carpark. We looked around and found the open canal had been covered up with concrete. Part of it is now a walkway starting from Jalan Besar. The other half is a driveway and is named Kitchener Link. I could roughly guess the position of the side gate entrance and pointed it out to Chun See. 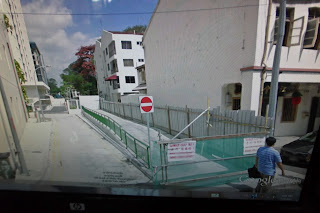 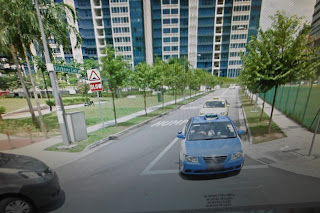 The side gate entrance was at the end of Kitchener Link

I walked along French Road and then to Jalan Besar to see the buildings that have replaced the three abattoirs before proceeding to City Square Mall for the opening ceremony of the Jalan Besar Heritage Trail. Then my memories flashed back to the abattoir days and the job I was doing. 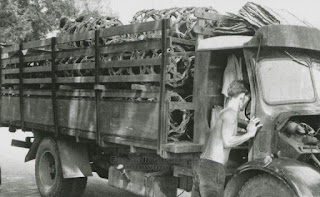 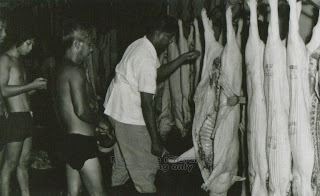 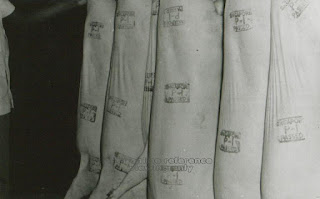 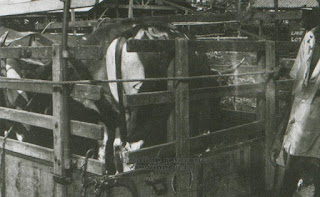 Photo from PICAS
cattle brought to the abattoir for slaughter 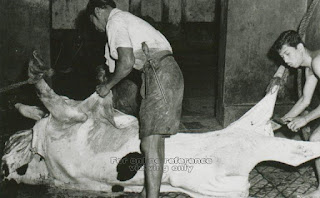 Photo from PICAS
skinning the cattle carcass before inspection 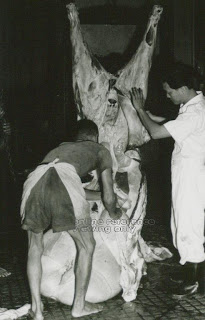 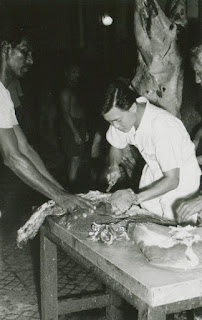 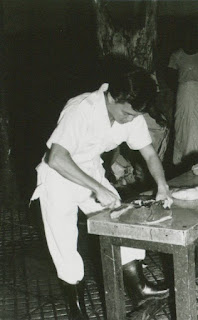 Photo from PICAS
cutting open the cattle liver for inspection

The three photos from the National Archives of Singapore surprised me. I did not expect to see pictures of myself doing meat inspection. I was not aware when the photos were taken in 1964.
Posted by PChew at 8:51 AM 1 comment: