Nowadays regional overseas tour packages are very cheap and Singaporeans spend their holidays in China, Taiwan, HongKong, the Asean countries or Australia. In the 1960s, such tours were few and very expensive. Furthermore, not many international airlines flew to Singapore. So, where did an average wage earner and his family spend their holidays? Our Government have many holiday bungalows by the sea for Division II & III officers located at Changi, Ayer Gemuroh, Tanah Merah (Wing Loong Road), Mata Ikan and Tanjong Rhu. They were very popular with the civil servants especially during school holidays. There were also Government holiday bungalows in Malaysia. Allocations of the bungalows were by a ballot through the Ministry of Finance. The period was from Monday to Thursday (week days) and Friday to Sunday (week ends). The peak period was during the school holidays and getting a holiday bungalow was like winning a lottery ticket. Most of us were single then and we applied for the bungalows during off peak period. As there was no guarantee of allocation, we got some of our friends in the civil service to apply together, thereby increase our chances in the ballot.

Unlike at Matta Ikan where all the holiday chalets had common compound and play area, the Tanjong Rhu bungalow was self contained, each with a large compound where several cars could park together. The bungalows were all of the same architectural design, each with 3 bedrooms and a large sitting room. Kitchen and toilets were at an out-house connected by a short covered walkway. It was very dark at night outside the buildings with no public lighting. There were many ghost stories and at night no lady dared to visit the toilet without a male escort.

The beach was very narrow and full of small sharp rocks. It was separated from the bungalow by a low concrete wall. Few people wanted to swim there becuase of jelly fish. Dancing was a vogue then and there was dance party every night. During the day, we had mahjong party. Holidays at the bungalow always ended up with a barbeque party on the last night. Tanjong Rhu bungalows by the sea were affected by land reclammation. They are now replaced by tall condominuims along the ECP (East Coast Parkway) expressway. 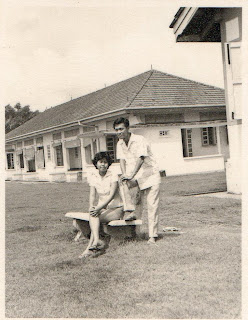 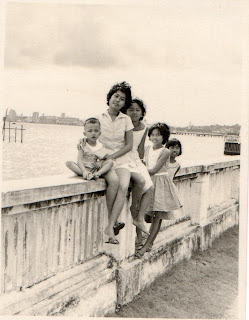 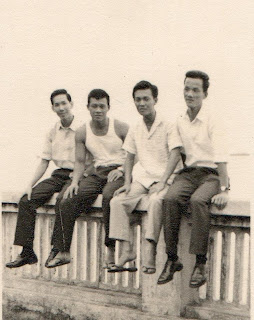 Sitting on the low concrete wall to enjoy the sea breeze 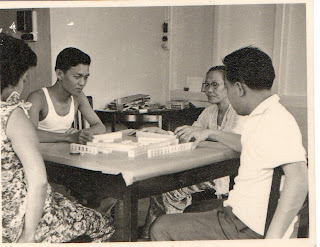 Relaxing with a game of mahjong 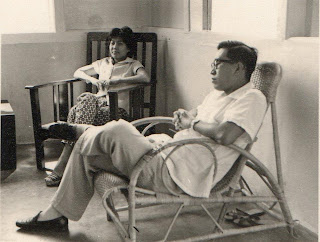 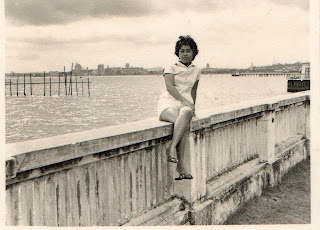 Smile, you are on candid camera! 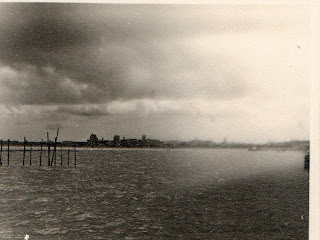 The wooden poles on the left showed the end part of a kelong which was very close to the beach
Posted by PChew at 5:22 AM 3 comments: 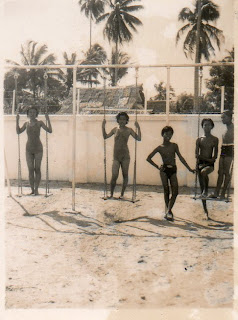 The above photograph was taken in the early 1950. Only 0ld timers age 50 plus would recognise this place. Where is it? Give it a try or find out the answer in a few days. 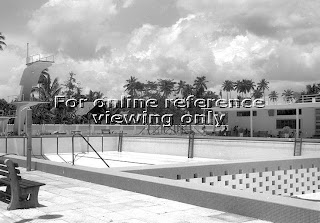 Picture from National Archive
The answer is Chinese Swimming Club. Yg almost got the answer but strayed away at the second guess. The attap house and the coconut trees in the background was Kampong Amber. The kampong has been transformed into many blocks of condominium at Amber Gardens.
Chinese Swimming Club then had 2 tier diving boards. At my first try I landed on my chest and had great pain, but only for a while.
Posted by PChew at 7:09 PM 10 comments: