So Near & Yet So Far

During the Japanese occupation of Singapore my 3 grand mothers lived in grandpa's rubber estate at Chai Chee, Changi. My third grandma had 3 sons and a daughter. Two of the boys were about my age. As kids we played together and got on well. After the war all of us moved back to live in Joo Chiat area. After my grandpa died in 1947, my third grandma and her children moved out of Joo Chiat. I lost contact with the family after my parents passed away. In 2007 I saw one my uncle's obituary in The Straits Times. I attended his wake to pay respect and also to reconnect with the 2 remaining uncles. In all they have 9 children who are my cousins. Except for one, the rest are younger than my children. We got connected and met for the first time. We had two reunion lunches to catch up about family matters. At the first reunion lunch 3 cousins could not made it. At the second reunion lunch a cousin from our grand uncle (grandpa's brother) side came to join us. 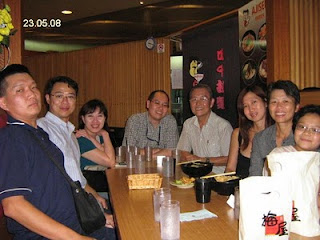 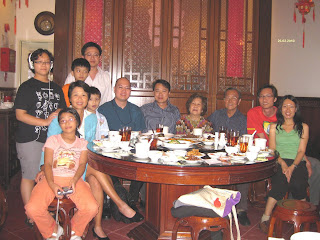 
Close relatives could be strangers on the road if we do not know each other. It happened to my family in March 2010. A cousin and his National Library staff attended a briefing at the Singapore Zoo. He was sitting at the front table listening attentively to the talk. Right in front of him was my daughter (his niece) and her colleague who gave the briefing. For more than an hour they faced each other without knowing they were related. A few days later he got wise to it and wrote to me. I confirmed that they were related. He wrote to my daughter and cc to me. He ended his email "It's a small world". I would rather say "It's so near and yet so far". I am glad that I got reconnected with my uncles and their children (my cousins). Early this month I found more relatives. They are in Australia, London, and USA. Gosh! The family tree is expanding and many have spread branches outside Singapore.
Posted by PChew at 12:08 AM 3 comments:

Blogging is for young people. That was what I thought initially. In fact most senior citizens are computer illiterate and senior bloggers formed a minor percentage in Singapore. Ivan my cousin encouraged me to blog and tell my own story. So, I started to blog on my golden years. They could be places down memory lane, lost relatives or people I once played with in my kampong and in schools. Such fond memories are nostalgic and I treasure them. Though I longed to see some of them again after so many years, but never in my wildest dream that my blogs could bring some of them to me. I consider them blogging dividends.

First Dividend In 2007 an uncle who I did not know existed then chanced to see the Story of Chew Joo Chiat, my great grand-father, also his grand father. He wrote to me about Chew Joo Chiat's grave which I was told had been exhumed. As he was based in Shanghai then, he referred me to his eldest brother in Singapore for more info. We met and at last year's Qing Ming, he and his son brought me and a cousin to Joo Chiat's grave at Bukit Brown. From the tombstone I learned that my great grand father had 5 children in all. That information together the new found relatives enable me to update Chew Joo Chiat's family tree. 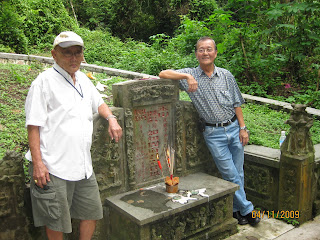 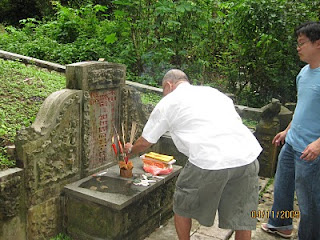 My uncle and his son whom I met for the first time last year.

Second Dividend In March 2010 a young man saw my blog post 'Back to School'. He noticed that I and his dad were in the same academic year at Raffles Institution. He wrote to me to see if I knew his dad, HK Wong. I replied with a photo of class 1952 attached. We were classmates then. Later HK Wong contacted me to arrange for a meeting with another 2 classmates. Last month four of us had a reunion lunch at Tanglin Club. 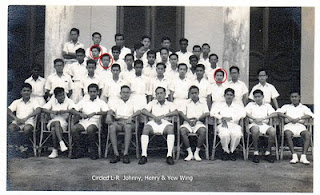 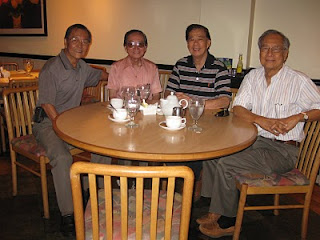 
I am very much encouraged by this and is now looking forward to a third blogging dividend.
Posted by PChew at 9:23 PM 3 comments: