Recently I met an old neighbour named Ah Heng. We chatted aboout the good old days that were more than half a century ago. He was a teenager then living in a kampong behind my house at Joo Chiat. He was an orphan at a very young age and was brought by a relative. As a teenager he did many odd jobs for a living. At age 16 he landed a job as an assistant to a Peranakan cook named Ah Hong (a fat Hainanese). Ah Hong was a live-in cook for Chew Joo Chiat's daughter who was also my grand aunt. I remembered Ah Hong well because he catered 'toh' panjang' (a long table displayed with Peranakan cuisine) lunch at my wedding.

Ah Heng was lucky to have the opportunity to learn cooking Peranakan food. After a few years he was so good at preparing Peranakan cuisine that a Peranakan restaurant, Guan Hoe Soon at Joo Chiat Road engaged him as the chief cooked. He left the restaurant service soon after he got married. The young couple started the Peranakan food catering business at their Pennyfather Road home. His food business was an instant success as many Joo Chiat/Katong residents loved to eat his Peranakan cuisine. I was one of his regular customers. I remembered seeing a long queue of people at his door steps, all waiting to take the yummy food in a tingkat (tiffin carrier) home for dinner. As a result, Pennyfather Road and all the side roads were jammed with motor vehicles and causing obstructions. There were complaints against him to the authority. His food catering business operating from home was unlicensed and illegal. He stopped his food catering business and opened a Peranakan food shop at East Coast Road between Jago Close and Chapel Road. His business was good but after a few years age caught up with him and he retired.

Chinese New Year at my home was like a gathering of the clans. Visitors arrived from morning to night in an unending stream. Years ago I remember my wife's nephew was the life of the party. He gathered all his young cousins to have a dice game called 'si gor luck'. He always played the banker. There was so much excitement when he rolled the dices as all the players shouted: "si gor luck!" for the winning numbers.

Come this Lunar Tiger Year we shall miss all our guests who visited us annually as we shall be away from home on a holiday. I am sure they too will miss us. We break the tradition for the first time. I felt sentimental viewing past Chinese New Year video clips. I love the crowd, the noise they made and their laughter. I shall miss all this. 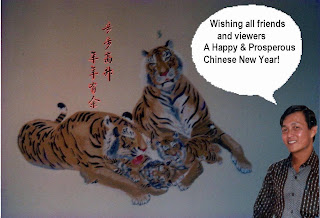