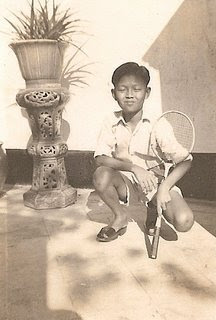 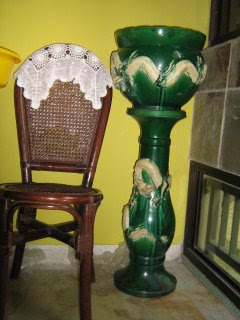 Indoor flower pot with stand
House No 73 was a 2 storey brick building with 3 bedrooms on the upper floor. it had a forecourt with timber fencing up to the road. On each side of the fence was a row of flowers in pots with porcelain stands. The outdoor flower pots and their stands were of inferior quality but were hardy and could withstand the weather better. The indoor flower pots and their stands were refine and of better quality. They had smooth glossy surface with carving of dragons or other animals and flowers.
The house had 4 sections
The front part was the hall/sitting room furnished with antique furnitures. Occupying the center area of the hall was a round table with 4 marble top stools. Leaning against both sides of the walls were side tables with chairs that had arm rests. All the furnitures were made of blackwood inlaid with mother-of-pearl. On Chinese New Year day, the side tables and chairs were dressed up with red velvet covers embroided with beautiful motif of flowers, dragons and phoenixes. On each side of the side wall hung a tall rectangular mirror in their Victoria frames. 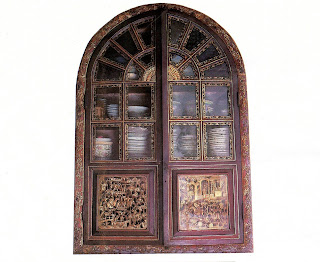 Carved and built in cupboard
Section two was a small room. One side of the wall had carved and gilded built in cupboard of Chinese design like the above picture. It was for the storage of glasses, cups and saucers. On the oppossite wall, a wooden staircase led to the upper floor. The room was dark but brightened during the day by natural lighting through a window on the wall between the airwell and the room. At night it was lighted by a dim electrical bulb.
The Dinning Room area included the airwell which provided natural lightings to the inner parts of the house. There was no tap water as Joo Chiat was still a rural area. A well below the airwell provided water for cooking, bathing as well as washing. The airwell wall was decorated with hung flower pots in the shape of sea creatures, such as prawn, crab, fish, shell and others. Next to the airwell was a common doorway to No 71 and vice versa (my uncle and his family lived there). The center wall had a large painting of 'kuang kong and his two sworn brothers'. To the left of the painting was a photo of Chew Joo Chiat and below it a porcelain urn with joss sticks (ancestor worship). At the dinning area was a large oval shaped table. About a dozen people could sit comfortably arount it. It was very heavey and needed four people to move it around. Both side walls had built-in wall cabinets. Crockery was stored there for use at meal time. Below the cabinets were blackwood benches in-laid with mother of pearls. The seats had 2 large marble slabs and were very cooling when lying down on a hot weather.
The Kitchen was small. Lighting and ventialtion was through a wooden window facing the backlane. Kitchen area consisted of a raised concrete cooking range, a bathroom, a latrine and a washing area. The passage was narrow and two persons could hardly passed each other. There were three stoves on the cooking range. Below it was a storage area for firewoods and charcoal which were used as fuel for cooking. Latrine was a bucket system. Bucket system meant a bucket was placed in the latrine to collect faeces. The bucket would be replaced with an empty one every morning by a municipal labourer. Fortunately, our latrine had a bucket door facing the backlane. So, the exchanged of buckets need not go through the house. In China town the houses then were all back to back. The labourers not only had to go through the house but had to climb from floor to floor. Imagine the drippings all the way throught the house and the staircases. The occupiers had to bear the smell everyday and also to avoid stepping onto the drippings.
The upper floor had 3 bedrooms. The front room was the largest and occupied about a third of the area. The middle room was small, about the space of a double bed with poor ventilation. The back was slightly bigger and brighter with windows. The lighting was dim at night, and as a child I dare not go upstair alone.
Posted by PChew at 5:35 PM No comments:

In 1941 my aunt registered for me to study at Choon Guan English School. War came and Singapore fell to Japan in February 1942. My education was disrupted.  Japan occupied Singapore for three and a half years. During that period I attended a Japanese school. In late 1945 Japan surrendered to the Allied Forces and Singapore was liberated.

In 1946 I attended the Telok Kurau English School. Primary school education then was seven years - Primary 1 and 2, Standard 1 to Standard 5. As an overage student I was put in Primary 2 for short period and then to Standard 1. In Standard 3 I met my Japanese school teacher Mr Lee Keng Yew. He became my form master for the second time. He was a man who observed personal hygiene by washing his hands after each lesson as well as after handling cash. I noticed his habit when I was learning Japanese in his class.
Mr Lee drove a car Austin A40 No S6002 to school every morning and parked it at the void area below the school office. During one school holdidays he took his students on an excursion to the Botanical Garden. At that time I thought it was a school programme. Before leaving the Telok Kurau English School, I realized that it was his own idea and the outing was at his own expenditure. I have not come across another teacher like him. It was 58 years ago and I continue to cherish the fond memory. 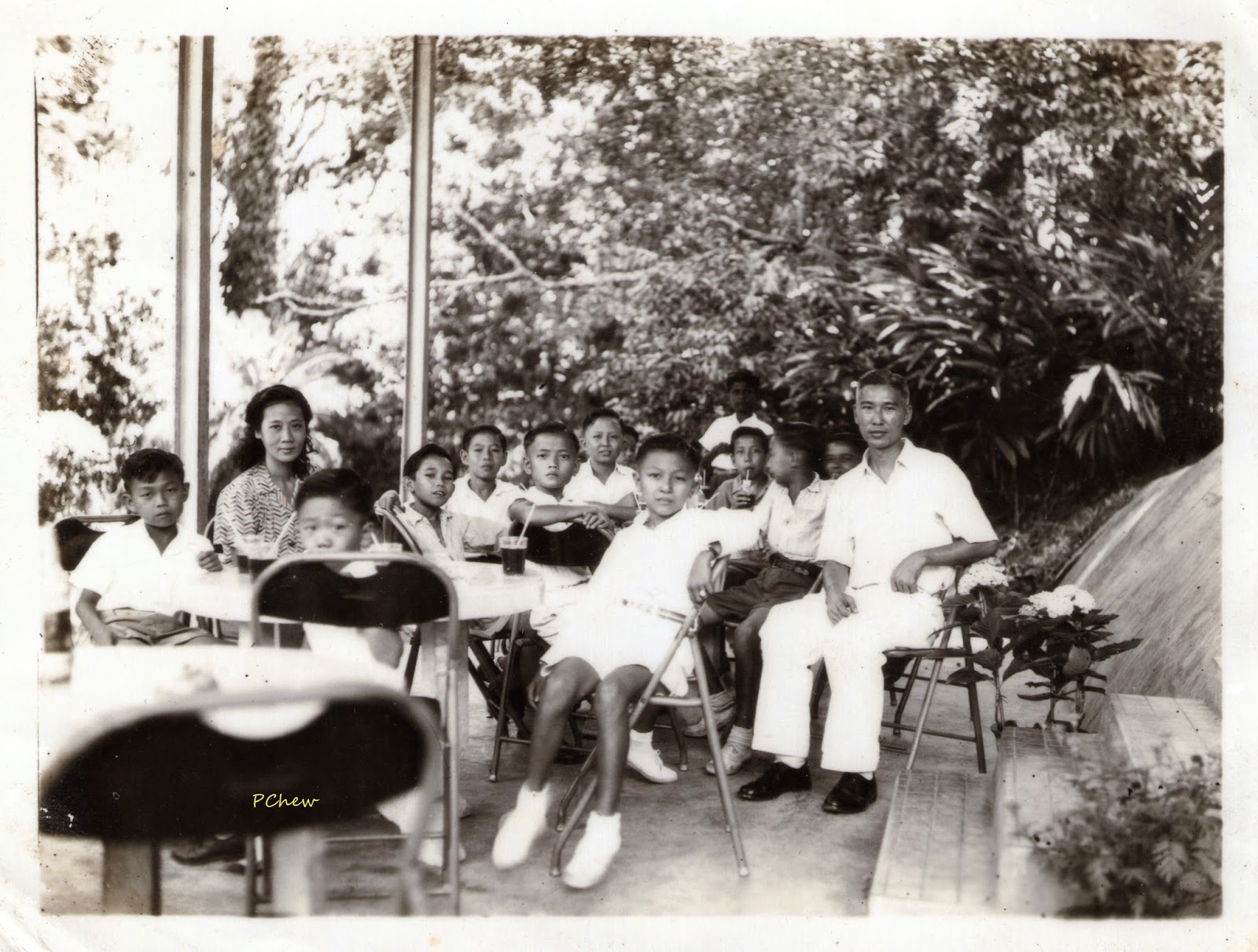 Mr Lee Keng Yew is sitting on the right 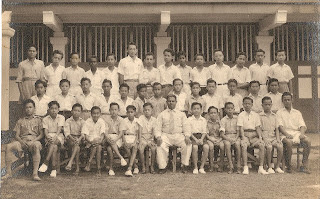 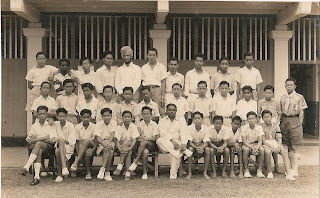 My final year in Telok Kurau English School was in 1950. Students from all Government primary schools in Singapore had to compete for places in Raffles Institution(RI). I was one of the lucky few to sail through. 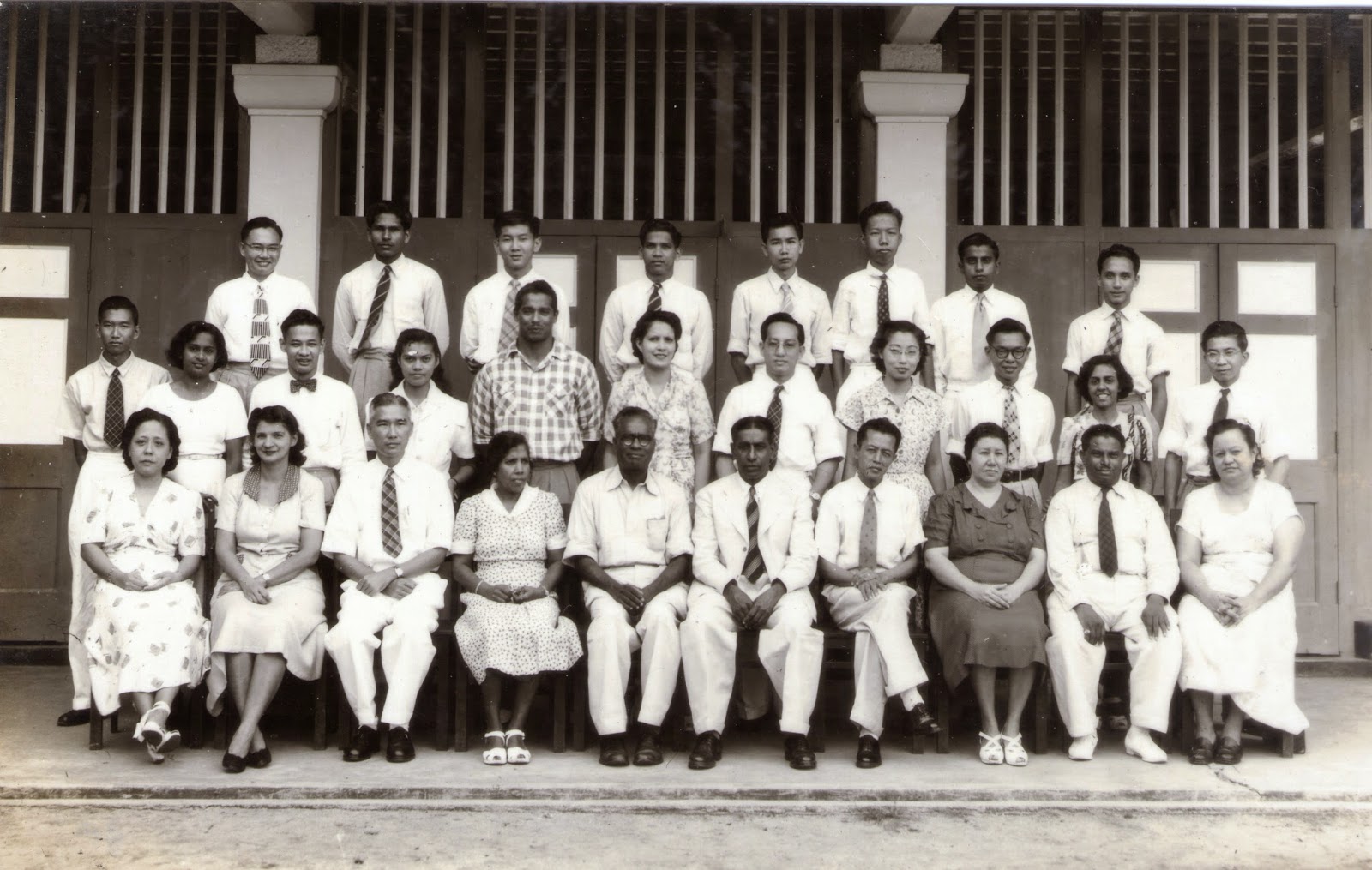 The school's annual sports events were held in June. During my last school year in 1950 it was held on the 15th June. There were 'egg and spoon race', 'sack race', '3 leggd race' and many others. The teachers also had a race event but I could not remember what it was. 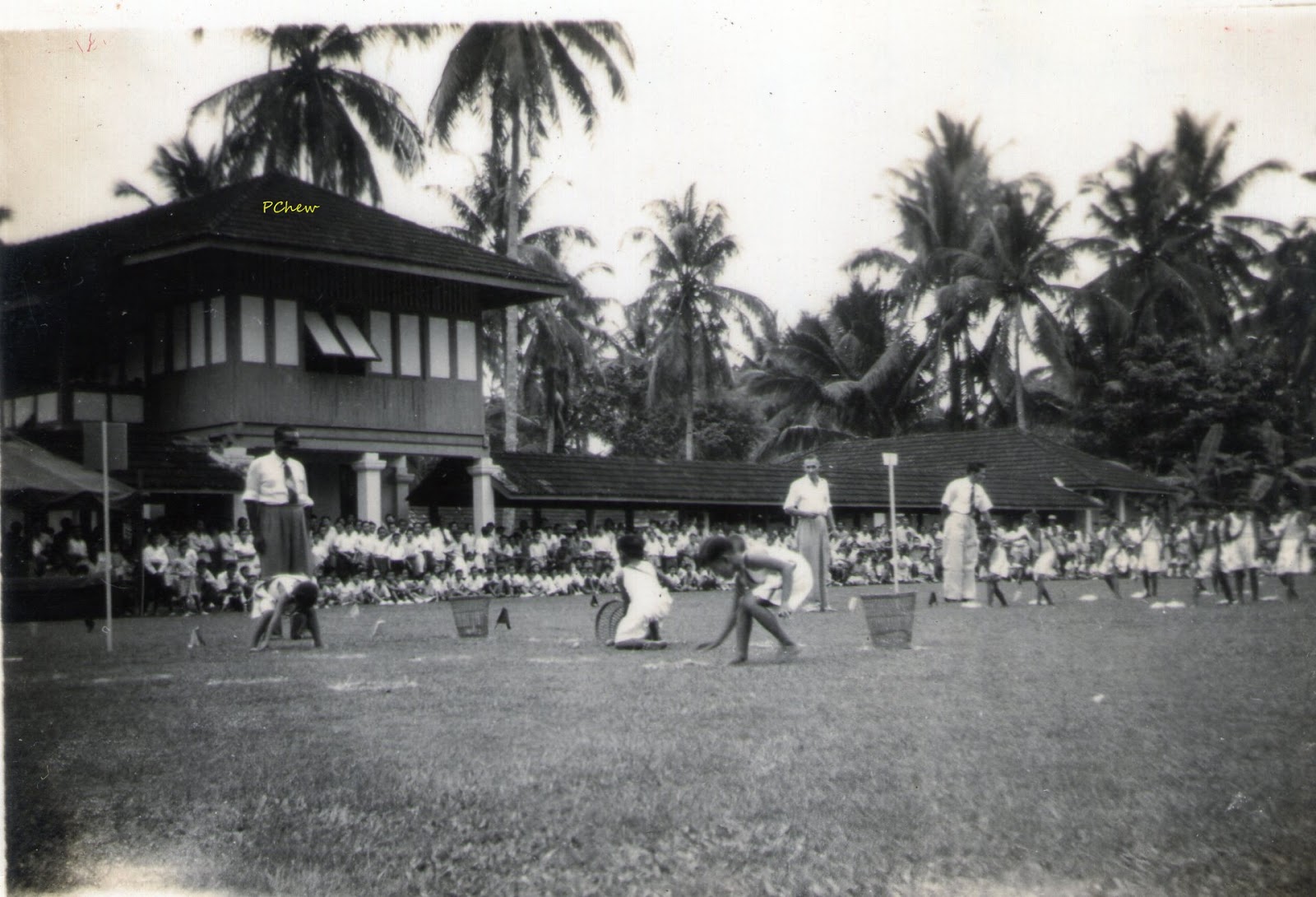 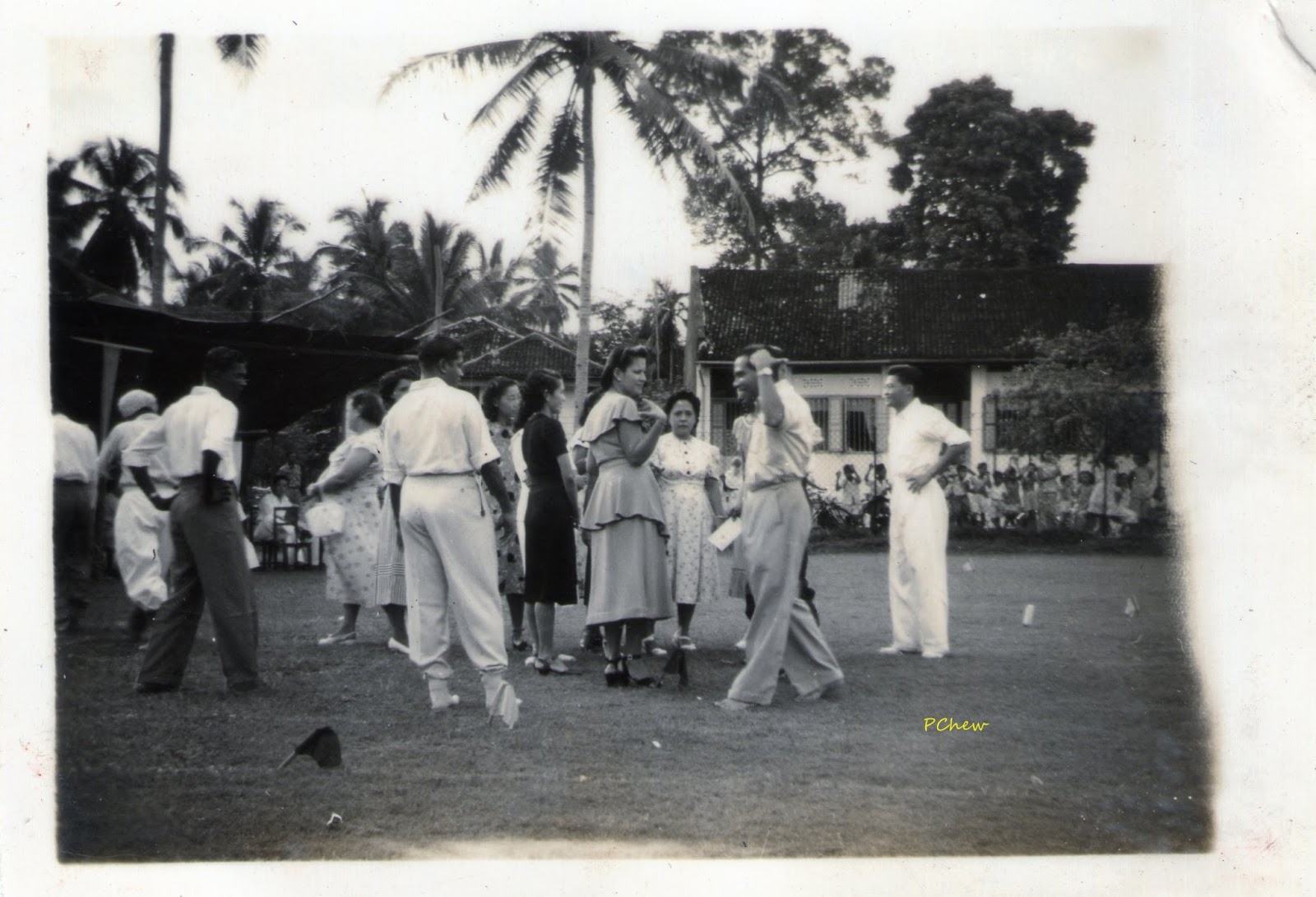 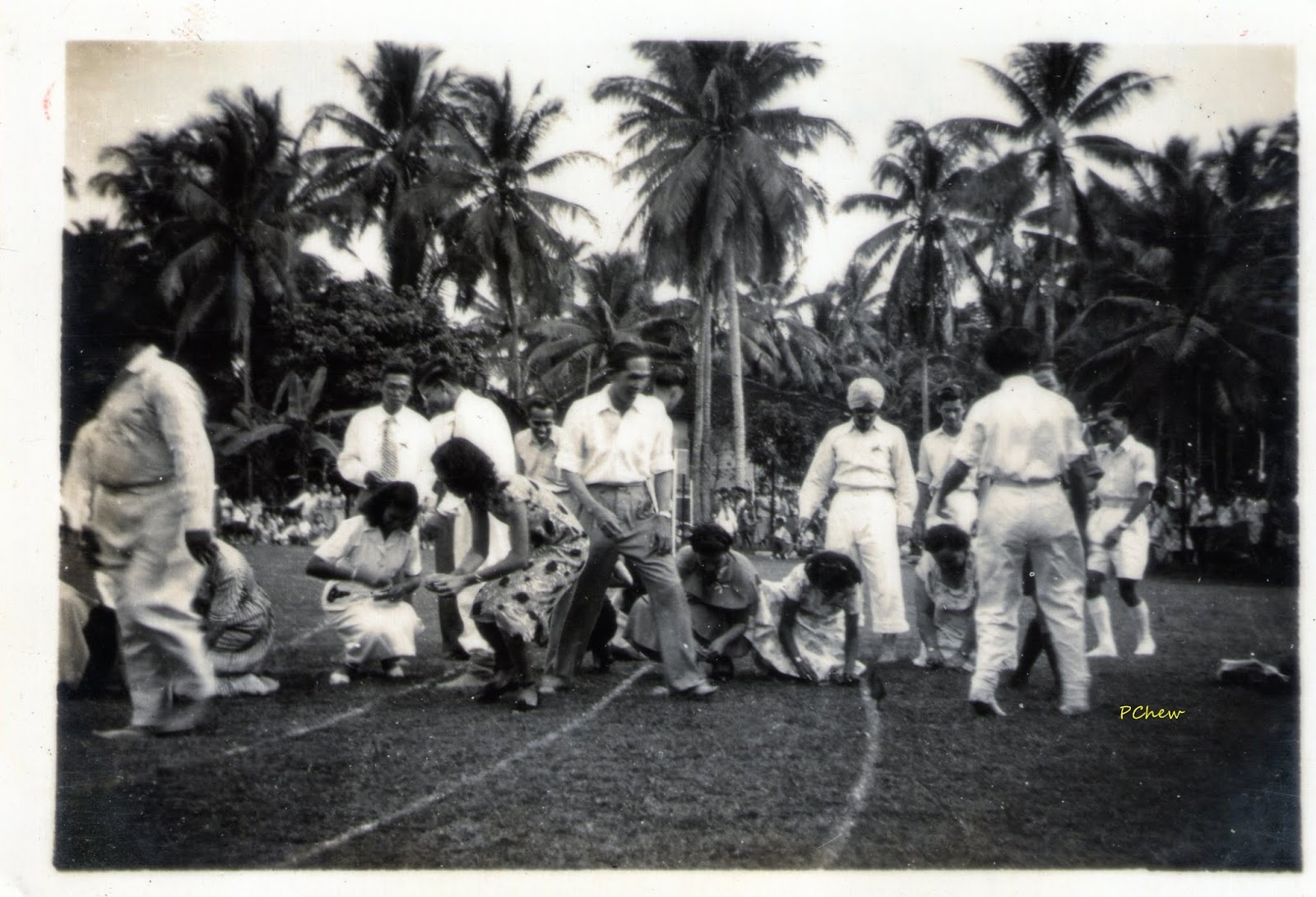 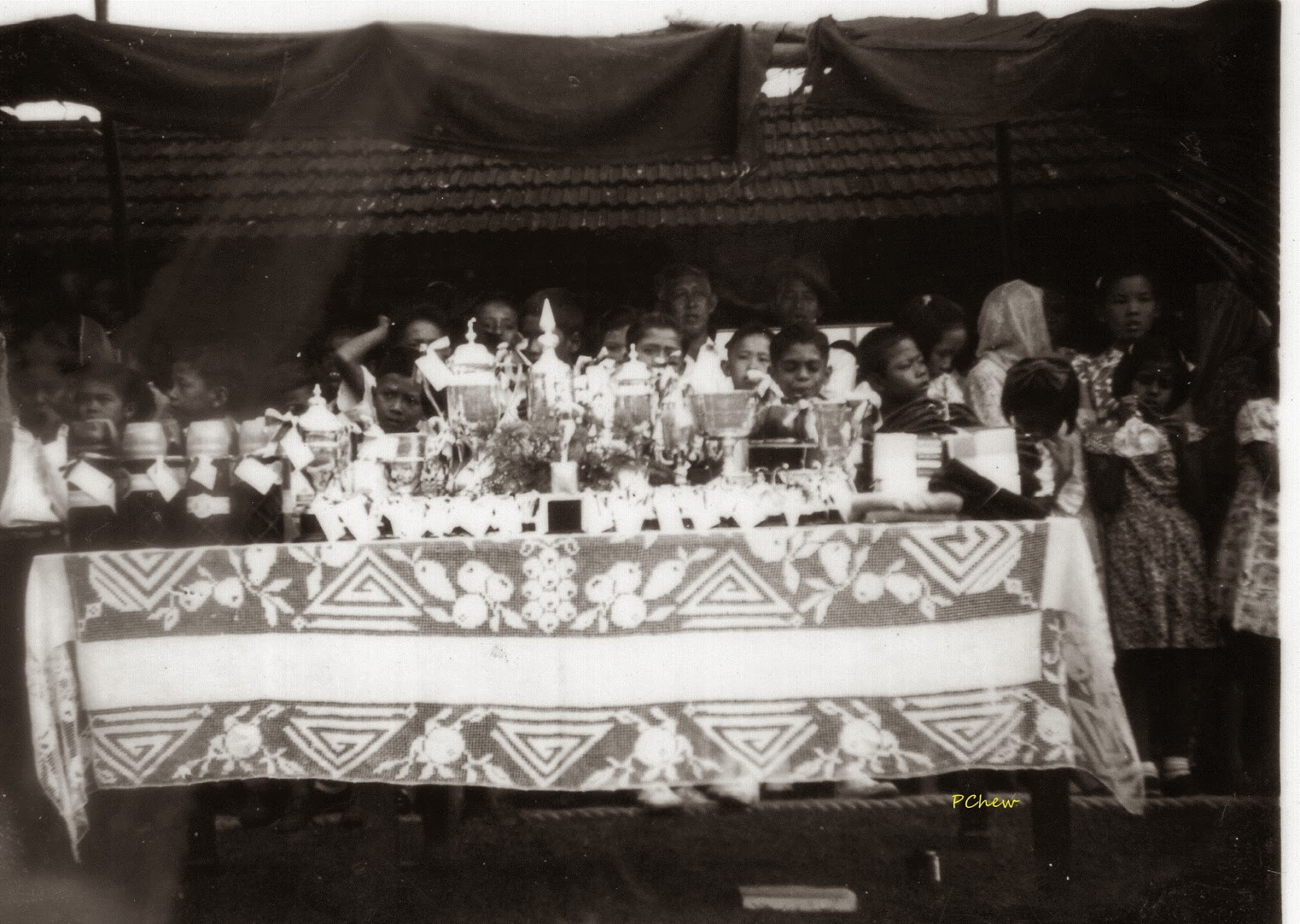 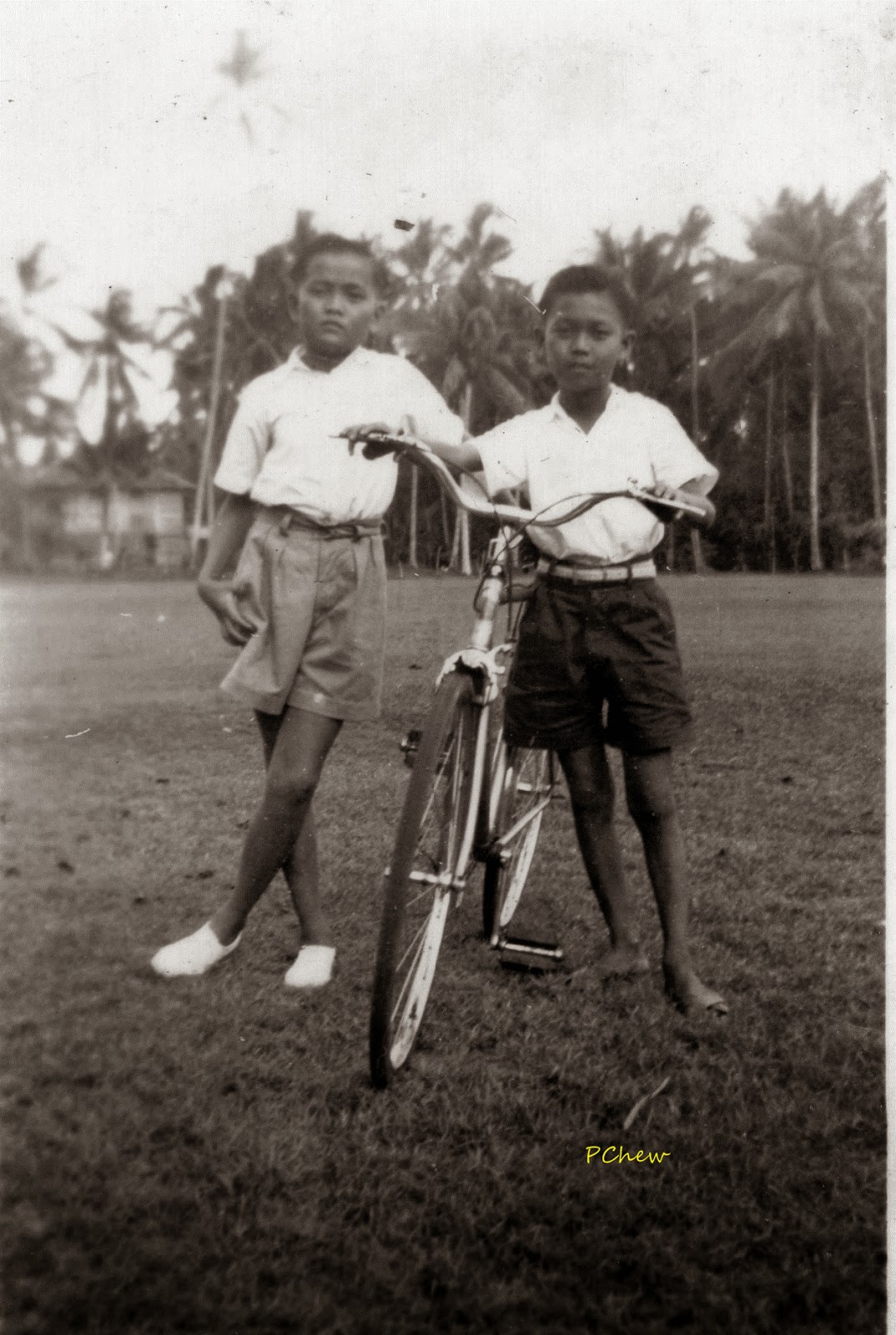 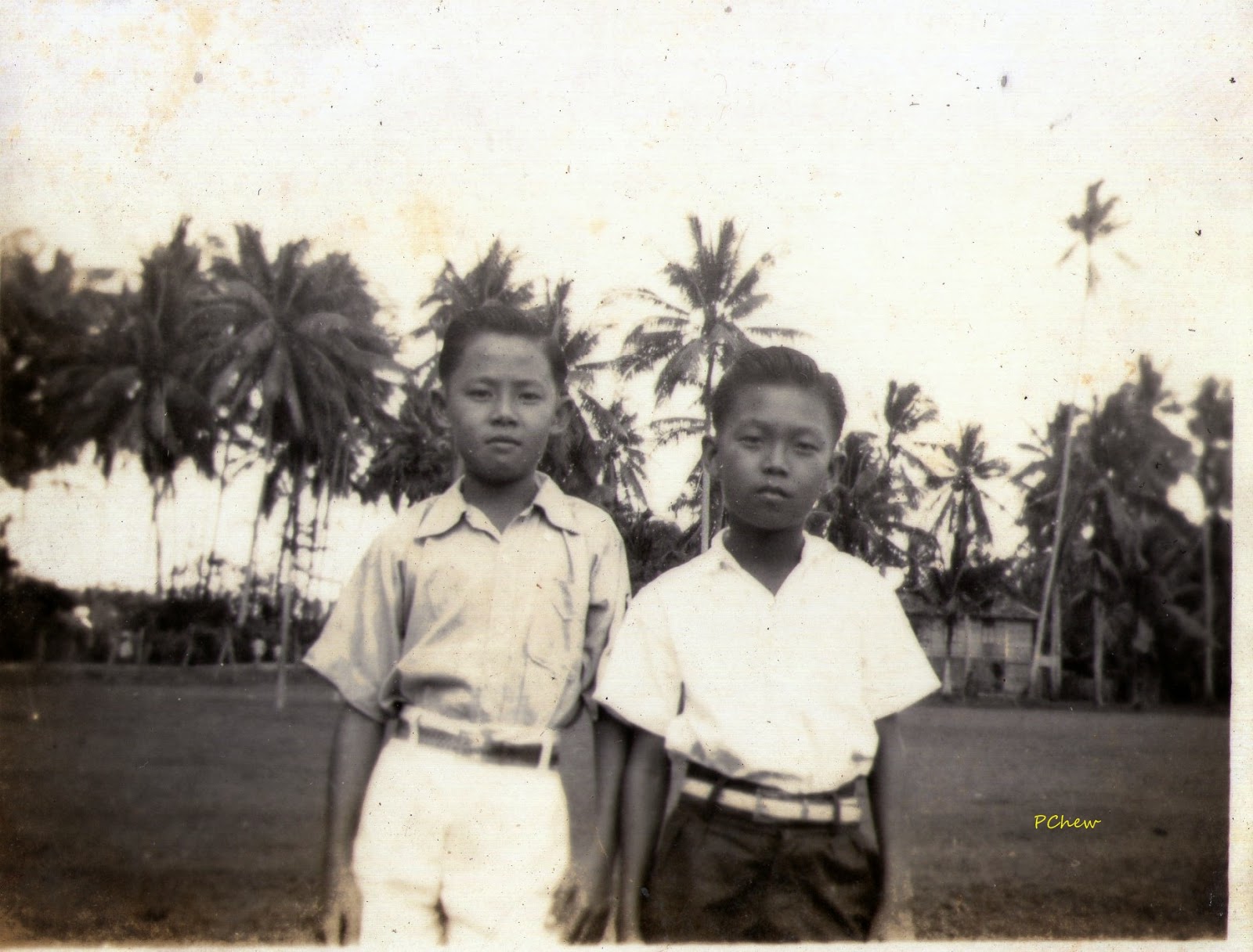 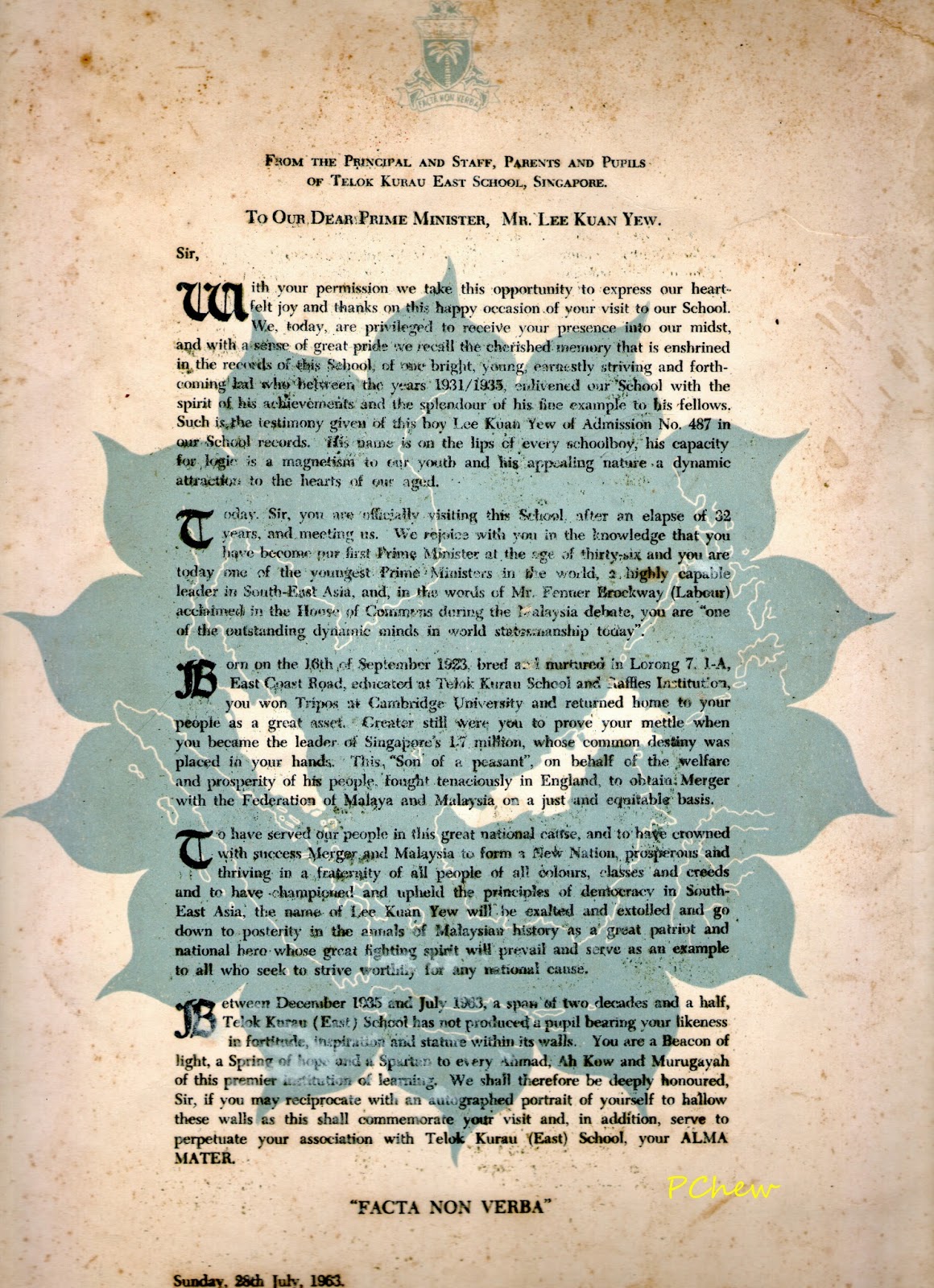 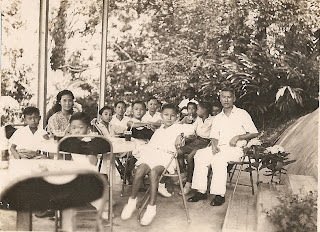 Picture shows a class (Std III) outing at the Botanic Garden.
The class teacher was Lee Keng Yew and the woman his wife.
I was on the extreme left.
Posted by PChew at 12:35 AM 5 comments: