On 27 Mar 2012 The Straits Times published an article regarding primary one school registration. Its caption "Registration changes will mean more slots for Singaporeans". Having priority over permanent resident kids is clearance of first obstacle. Singaporean kids have still to compete among themselves in other phases of primary one school registration excercise. Sibblings already in the school are automatically given a place. Next phase is children living within the school zone, that is within 1 km of the school. Final phase are for children who had no affiliation with the school and will be balloted for the remaining vacancies.

The school primary one registration exercise flashed my mind back to 1969 when my eldest son Chris had to register for a place in primary one at St Stephen's School. He came under the last phase excercise and there was no balloting then. It was a 'first come first serve' exercise and the long overnight queue was like buying a condo during the building boom. At that time there were very few primary schools in the east. We opted for St Stephen's School and had to queue up overnight to get a place for him. My son was lucky to get a place. I am not sure about those who were lining up behind us as there was very few vacancy left. Three years later I went to the same school to register for my second on the appointed date. He was automatically given a place for having a brother in the same school. I think the primary one registration exercise should be reviewed and changed to a system that is fair to all. 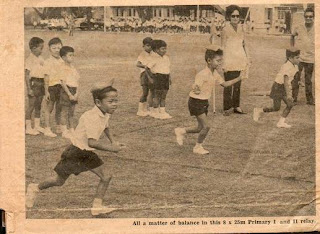 St Stephen's School sports day was featured in The New Nation newspapers on Thursday May 13 1971. The boy in the center is my son Chris. He took part in the 8 x 25m relay. Each boy had a bag on his head while running. It's a matter of balancing. That was 41 years ago and his children are now older than he was in the above picture. 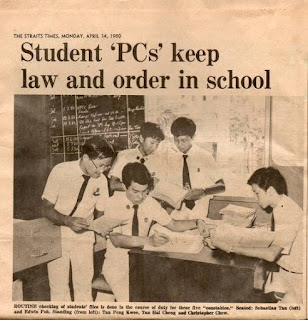 On Monday April 14 1980 The Straits Times published an article about student police corps in St. Patrick's School.  Again he was mentioned in the article together with a group photo.
In that year the student corps actually helped the police to detain a suspect who allegedly robbed a student of his watch in the school compound. They investigated the case by interviewing the victim and managed to established the identity of the suspect including a photograph of him. The student corps went to Joo Chiat Police Station and provided the police with what they had found. Later the suspect was arrest.
Posted by PChew at 6:57 PM 2 comments: