Today the badmintong and tennis rackets are light weight. The frames can be of steel, aluminium, carbon firbre, graphite, ceramic, boron or a combination of some of these. Japanese brand rackets such as Yonex is the premeir manufacture of badminton rackets. Popular western brands are Dunlop, Wilson and others. 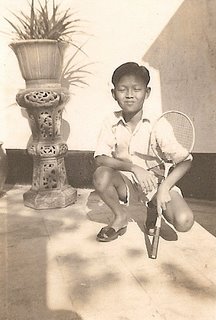 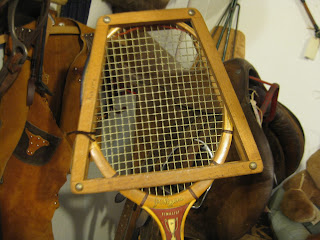 a wooden tennis racket within  a racket guard

In the 1950s and 1960s badminton and tennis rackets were made of wood and was quite heavy. The western world monopolised the premier manufacture of the rackets. The good brands were Head, Wilson, Dunlop, Prince, Donnay etc. The cheap ones were from India and Pakistan. Unfortunately, the wooden badminton racket as well as tennis racket wobbled out of shape due to the weather. Therefore, a racket was always kept in a racket guard when not in use as in the above photo.

That was the way we were when playing racket games.
Posted by PChew at 8:19 PM 2 comments:

What is a bucket latrine? To those who has no idea what it is, a picture is worth more than a thousand words. 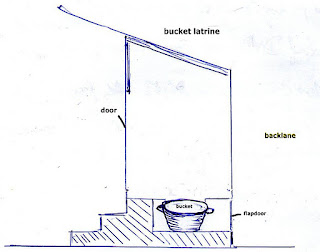 Sketch of a bucket latrine 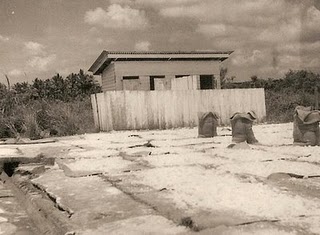 Bucket latrines outside a factory 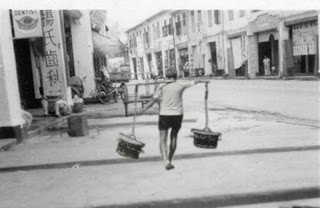 In the early 1960s most shophouses outside the city used bucket latrines for disposal of human wastes. The latrine was usually located at the extreme end of the house so that removal of the night soil bucket could be carried out from the backlane. In the case of 3 storey back to back houses in China town, there were inadequate latrines in each floor. As a result the night soil buckets were often filled to the brim and waste liquids dripped all the way from the upper floor down the staircases to the ground level. Imagine the stinking smell the tenants had to bear daily. 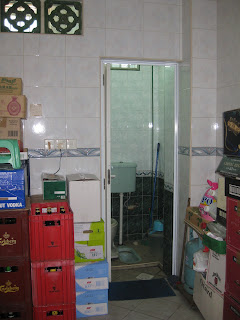 Later sewers were laid in the backlanes and house owners had to convert a bucket latrine into a water carriage system squat pan as in the above photo.

My house had about 10 people living together. The night soil bucket was not only often full but also stink. I was forced to light a cigarette to counter the melodorous assault. My mother smoked and I took her tobacco to roll my own cigarettes.

That was the way we were!