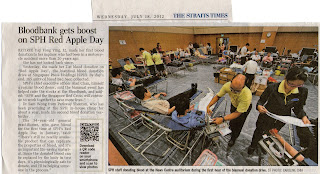 The Straits Times 18 July 2012 published an article "Bloodbank gets boost on SPH Red Apple Day" The above article reminded me of an appeal by The Free Press dated 5 July 1955 with the opening sentence "Your blood may save a life". 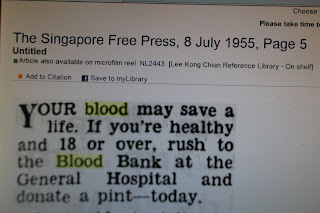 I was then working in the City Council and the appeal for blood donation went to all the departments. The response was good for many of the staff signed up. One week later a mobile blood collection unit arrived at City Council. It was formed in 1949 to enable donors to give blood near their homes or at their workplaces. A year later the Singapore Blood Transfusion Service (SBTS) began giving out certificates, badges and  medals to recognise its regular donors.

The SBTS took 100cc of blood from each donor as stated in the Free Press. But in my case, because I had blood group "B" which was very rare and most useful to save life,  more than twice the amount  (220 cc) of blood was taken from me. I donated blood to save lives and also to find out my blood group. As a blood donor I was given a certificate which showed my name, blood group and the amount of blood donated. 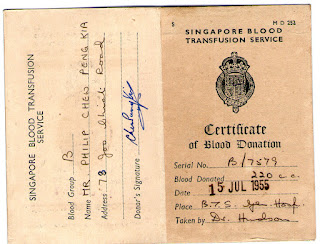 Later when there was an appeal, I went directly to SBTS  to donate blood and was given a can of beer or stout to drink at each visit. I understand SBTS had stopped giving free beer/stout to donors sometime ago.
Posted by PChew at 6:53 PM 4 comments: