Growing Up In Joo Chiatt

I lived at Joo Chiat Road with my grandmother, an uncle and his family since I was born until 1957. Behind the house was a small kampong where Chinese, Malay and Indian families lived side by side in harmony. As a kid the kampong was my playground and kids learned to speak each others' language easily. A Malay friend's mother not only spoke hokien dialect fluently but also learned to play mahjong and si sek pai ( 4 coloured cards sample below) with her neighbours.

Fronting my house was a vacant area. Actually it was part of the house with wooden pagar (fence) and flower pots on stands on both sides of the pagar. During the war the wooden fence was removed. Illegal hawkers set up stalls there every morning and cooked food hawkers got free water from us. Whenever there was a raid by the Hawkers Department they took refuge in my house. My grandmother was a friendly lady. Kampong folks took advantage and used our house as a short cut to Joo Chiat Road. At peak time in the morning it was like a public thoroughfare.

My uncle's friends were shopkeepers, traders and hawkers in Joo Chiat area. At evening time our house was like a club house. They came to chat and drink beer and hard liquor. But their actual motive was to gamble later. The played pah kow (3 cards), poker or mahjong when there was enough kaki (players). Occasionally two games were played at the same time in the house. It was like a gambling den. My uncle did not gamble as he was the horli (a person who shuffles and distributes cards to the players like a croupier in casino) and collected taxes from the betting pool. I learned the game and at times relieved him as horli.
I could still remember three players clearly. One was the proprietor of a furniture shop aka panjang (lean and tall). He lived nearby. The other was a business man aka ah sia (a rich heir in Teochew dialect). The last guy was the famous laksa hawker aka jangok (he had a few strands of long hairs growing from his chin). The first two guys were opium addicts. Coincidently, there was an opium den behind my house. They always had their puffs first before coming to our house from the back door to join the other players. 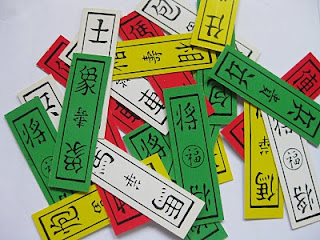 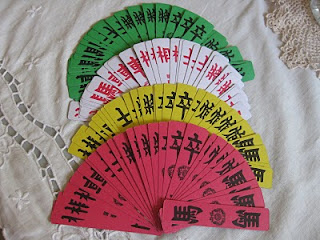 In the 1950s Joo Chiat area had many secret societies from gang 24, 18, and other numbers. Their members then were mostly youngsters. They were quick tempered and often resulted in fights. The more serious gang fights were over collections of protection money. When there was a gang war innocent bystanders were common victims. Sometimes I was tipped off not to go near certain area due to impending gang fight. Below are a few newspapers cuttings about gang fights in Joo Chiat. There were much more incidents of gang war in 1950s. So, Joo Chiat area was not a good place to raise a school kid like me.
Newspapers Cuttings of Gang War in Joo Chiat 1950s 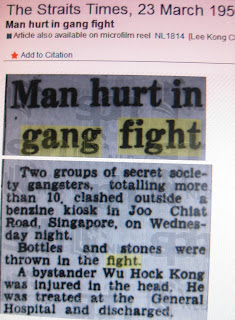 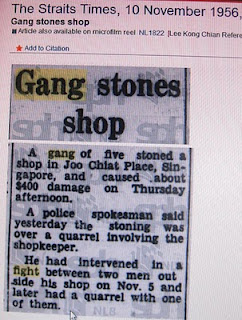 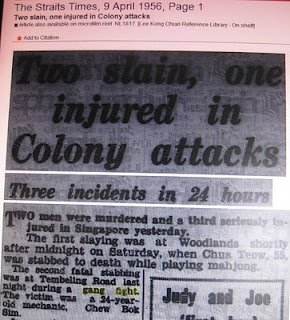 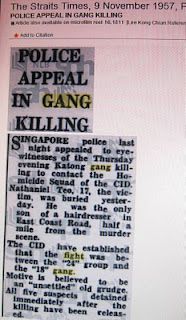 Labels: Growing Up In Joo Chiat

Telok Kurau English School was the only English school in the eastern part of Singapore before 1950. It was situated at Lorong J Telok Kurau. I attended that school from 1945 to 1950. I still remember the two-storey timber building with many coconut trees in the vicinity. I understand the area was a coconut grove before the school was built in 1926. Further into Lorong J there was a cattle shed. Everyday the cowherd drove the cattle to graze outside the area and had to pass through the school. Needless to say, there were cowdung everywhere on the road. Walking to school had to be very careful. Anyway it was quite common to step onto the cowdung. The school had a large playground stretching from the school building to Lorong H Telok Kurau. The playground was used for morning physical exercise, footballs, games, athletic practices and annual school sports.

The school gardeners and caretakers lived in quarters within the school compound nearby the school hall. They were allowed to rear chickens but confined to the quarters area. There was a peon (office boy) whose name was Rosland. He was a good natured person, always smiling and obliging. School record stated that Mr Lim Lan San was the first teacher of the school in 1926. When I was there in 1945 he was the vice principal of the school. He lived at Joo Chiat Place and his son Lim Eng Hock was my school mate. 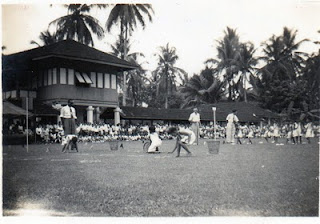 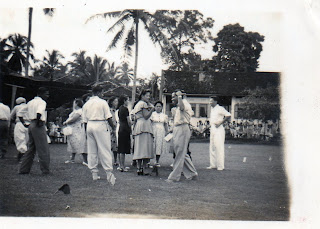 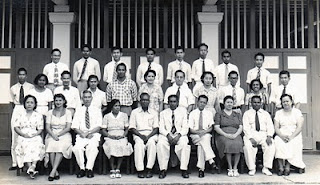 There were two teachers in the school who impressed me. There were:

Miss Boey: I forgot her name as all the school boys addressed her by her surname as Miss Boey. She was a spinster and a very dedicated teacher. She lived in a lane off Changi Road behind a block of building at Telok Kurau Road and Changi Road junction. I was in her class in Standard One. On one occasion a few of us went to her house to play. That was how I came to know where she lived. The narrow lane was not there anymore. It was a private road and the whole area is now replaced by new buildings. Once I saw her teaching a student lessons in the class. After some time she appeared frustrated and trying to control her emotion. Finally she broke down and cried. Later I came to know that no matter how she taught him, he still failed to understand her teaching. A year later, I was told she passed away from an illness. As the saying goes "the good die young". 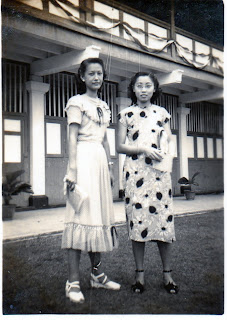 Mr Lee Keng Yew: I remember him very well because our paths crossed a few times. The first was during the Japanese occupation. He was a school teacher at Koon Seng Road Choon Guan School teaching Japanese and I was in his class. He was tall and thin and had the habit of going straight to the wash-room to wash his hands after each lesson. I believed he wanted to wash away the chalk dusk on his hands. After the war, he was posted to teach at the Telok Kurau English School. During my time the primary school education was seven years, from Pr. I to II and Standard I to V. In 1948 he was teaching Standard III and I was promoted to his class. I remembered his good habit and observed that he was still the same. I also learned that he washed his hands after handling money. Teacher in class collected supplemetary fees from students but not in Japanese school. In fact, his good habit was also known to all his colleagues. During the school holidays he took the class on an excursion to the Botanical Garden. His family also came along. He drove a British made Austin car and parked at the void area near the staircase. 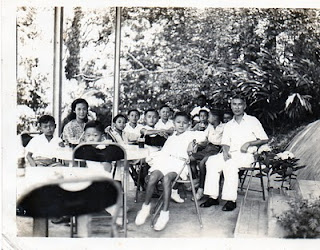 At Singapore Botanical Garden
Mr Lee Keng Yew sitting on the extreme right. His wife on the left and his son at the front turning to look at the camera.

Our paths crossed the third time when he was the Principal of Haig Boys School. I was courting my girl friend (now wife) who was his school clerk in 1957. He had good memory too. When he first saw me in his office, he remembered that I was his student at TKES. He was suprised when I told him that he also taught me Japanese too at Choon Guan School. My memory on the above lingers on and old photographs help to refresh my minds of the past.

Next post: My Joo Chiat Environment
Posted by PChew at 12:43 AM 8 comments: