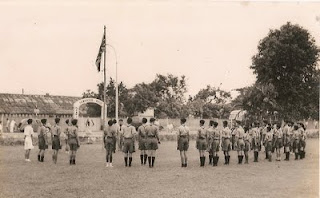 
Many articles were written about the NAAFI Britannia Club built in 1949 and completed in late 1952 at Beach Road and Bras Basah Road junction. Bloggers such as Laokokok and Lum Chun See had written about the NCO club in their blogs. So far no one has talked about the one opposite the Raffles Institution. This picture was taken in 1952. Enlarge the picture and you'll see the words NAAFI Shop clearly at the arch entrance. The premises was disused then. Could it had moved over to the new building? Was it the first NAAFI Club before the one opposite Raffles Hotel? If so, it deserves a place in the history of NAAFI Club in Singapore.
Posted by PChew at 12:13 AM

What I could remember about the Brittania Club at Beach Road was when my NS camp mates and I went there during weekends to drink the duty-free beer at 50 cents per glass. This "special priviledge" for NS men was withdrawn a few years later becos too many guys got drunk and were arrested for brawls in the club, I was told. Sad.

Which scout troop was this?
SJI or Raffles?
Looks more like Raffles..2nd or 32nd troop. A very good photo I must add.
thanks Philip!

32nd Raffles Troop! My back was facing the camera, No.12 from the left. Were you a scout too? You can see more of my scout pictures in my 2008 blog.

Yes, I was first a cub, scout in the 19th Owl Troop Geylang English School. Then 6th Arrow Scout Group, Victoria School. Was involved from 1957 right past 1972 ( then a senior scoutmaster).
Will look into your past scouting pics.
I have not really got down to blog about singapore scouting...need to organise my archives first.

i, too, was a scout - for one year only - when i was in pri 6 at newton boys' school. in the early 60s, when i studied at bras basah road, i could see the britannia club from my class but i don't remember seeing the naafi shop along beach road.

The NAAFI shop was a NAAFI club. It was known as NAAFI Shackle Club before moving the new building opposite Raffles Hotel in 1952. Later the old club house was demolished. By 1960 it was no longer there. Therefore, you did not see it. Luckily I got a picture of the old club house or it would have been forgotten.

PC Chew
Can you help orientate me to the directions of your photo. In which direction was the arch facing? Does not look to face Raffles Hotel. I have a 1947 photo of the Shackle arch.

The NAAFI shop at Beach Road was facing Raffles Institution(RI). In the photo were scouts from RI at flag breaking ceremony.

Professor do mind email to me a copy of the 1947 photo shackle arch?

I asked Ivan for your email - will send then.

I still cannot figure out where's RI. You said the buildings behind the arch? That does not look like RI. Once you receive my email, can you use a red pen and scriblle the arrow directions? Thanks

If you read carefully, I said the Shackle Club was facing RI. In fact, they were opposite each other. Beach Road was between them.