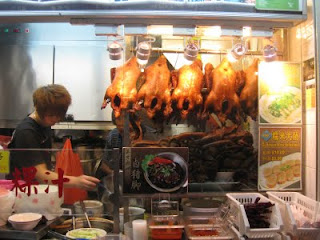 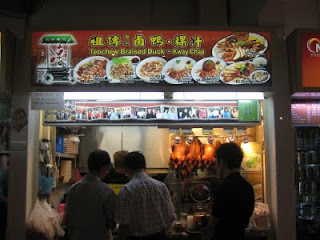 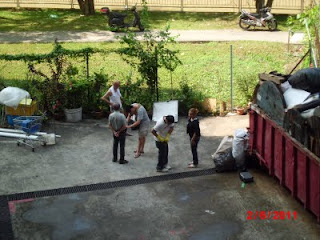 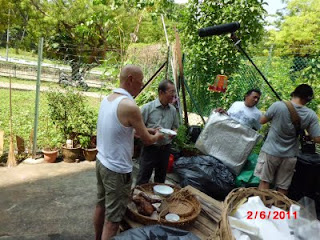 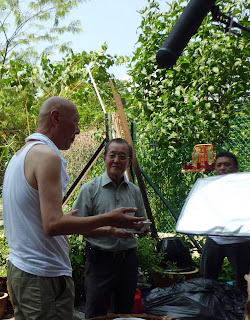 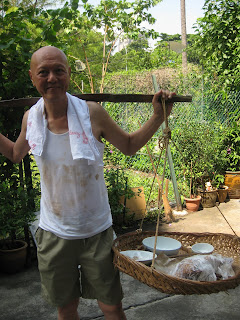 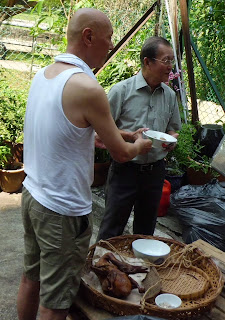 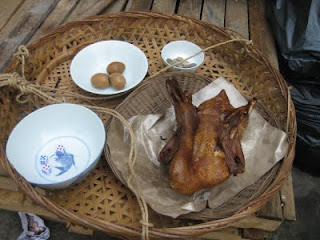 Hey Philip. How can you forget to mention the contribution of the film critic who pointed out that our lead actor did not look very authentic because his singlet was so white and clean; and some more did not have any holes in it.

In our kampong,we too had a lor ark seller who came in a motor bike. He was from another village. My mum liked to buy his lor ark. His chilli was very nice.

My Lor Arh hawker's singlet had no holes. Might be yours was poorer lah!

Yes, yes Philip we mustn't forget our film critic and consultant Brother Lam Chun See, SIP Producer/Director Thinker/Doer Sok Kiak with Team Co-ordinator Catherine Lim, the production crew and everyone to make the heritage food documentary on TV possible. Thanks to everyone.

Thanks to Chun See for his sharp observation to details and spotted the hawker's spot and clean singlet with no wear and tear for an "authentic" presentation.

Philip, appreciate for the preview on the heritage food blog which a friend has learnt the rule of the "lor arh dices game" from your description which his father once played the game four decades ago but never told him. Now he knows!

Singlet got holes or no holes does not matter very much...you guys have done well! It's never an easy thing to try to recreate an authentic scene with limited resources available. James looks so cool in his outfit..from the pics.

Dear Uncle Philip,
A post which really brought back my memories. I had lived in Lorong 15, Geylang, in the 60s. I remembered there was this man wearing an old trishaw hat, a street hawker selling lor arh and stuff, coming to my father's shop's five-foot way around 2-4pm. I cannot remember much about the 'arh', as children did not have much chance to savour such expensive items. I strongly remember the taste of the fishball (served on short satay sticks when not buying any duck meat), which was fishy, very fishy, but delicious. The other fond memory was the chilli sauce. It had an extremely strong garlic flavour. It was so strong that it left on me a deep impression for over 40 years.

Hi Peter, I was told your mother was very good at playing dice game and often won the whole duck. If she is still around I could get more details from her about the lor arh hawker. I forgot that the hawker had fish balls and the chilly sauce had strong garlic smell. Thanks for the memories.

Unk Dicko, I defied film critic/consultant Chun See against his instruction to poke holes in the singlet. Soiling it with black sauce was ok because the singlet could be cleaned after film shooting I could still wear it. To throw away the singlet after one act was such a waste I thought. Sorry Brother Chun See, sorry for the unauthentic singlet without holes...

Almost all the itinerant hawkers whom I had met and that's a lot of them...do not have "holes" in their singlets,shirts or dresses. A dirty-looking, ragged-looking hawker does not attract customers...even in the past. They may be hawkers but also had self-esteem.Some even wore proper hats that added to their image. The 'lang ting tang ' apek who plied his trade and talent alone by entertaining while strolling through my kampong..is an excellent example. He usually wore a blue tunic, with 1930 hat on his head and proper socks and shoes. He was someone, as kids, we would all rushed out to see and listen to when we caught the intoxicating strains of his music from afar.

Thanks PChew for the tip. Will struggle to the Lor Arh for a meal one of these days.

I am still learning.

Dicko, isn't 'lang ting tan' apek a fortune teller? At my place he appeared at night only. He had a guitar like musical instrument at the tip of which he hung an oil lamp. Around the lamp were sticks of 'çheam si'. The customer picked one stick with Chinese characters on it. The apek interpreted the 'cheam si'by singing a song related to it.