We moved to Marine Parade HDB estate in 1975. At that time there was no East Coast Park (ECP) expressway from Changi International Airport to the City. It was still under construction. Although many instant trees had been planted at East Coast Park I could still have a good view of the park and the sea from my apartment. The open ground was very popular with kite enthusiasts. They flew fanciful kites of different shapes and designs. Some flew their kites for shows and others used their kites to 'fight' in the air.


Quite often my family walked to the park to feed the fish in the pond. The water then was clear and we could see fishes swimming around. There were also tortoises. They were usually found together sunbathing on the rocks in the middle of the pond. Other activities thereat included insects hovering around flowering plants. Occasionally we saw birds chirping on nearby trees.


Today, thirty five years later the scene has changed. Nobody goes to the pond to watch or feed the fish. The water is now covered with green and yellow algae making it hard for the fish to breed. In fact, the pond now looks repulsive. Furthermore, the ground around the pond is wet and muddy. Hope the authority would do something about it.


Picture below shows a clear view of the Marine Terrace HDB flats as seen from East Coast Park pond. The picture right below it shows the opposite. The view of the HDB flats is obstructed by the trees and plants in the park. 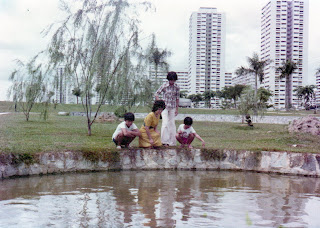 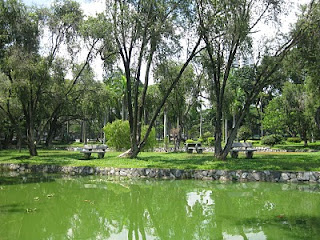 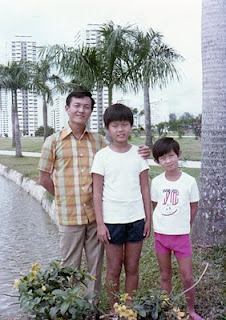 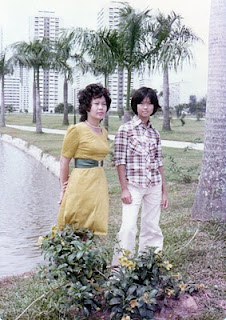 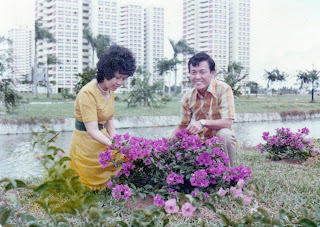 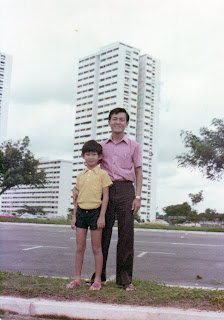 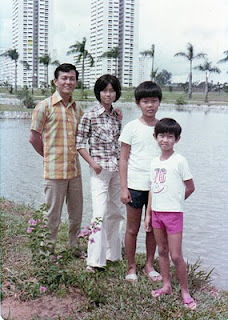 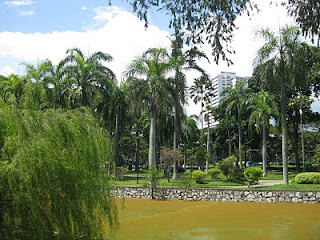 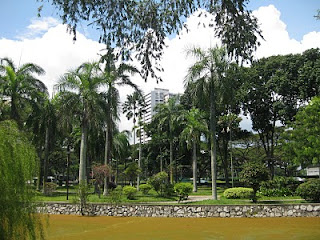 
Now all the trees and plants at the park have matured. Only the tops of the HDB flats at Marine Parade are visible as seen from the park. The lower parts of the buildings are mostly blocked by the trees and plants. The view of the ECP expressway is completely obstructed.
Posted by PChew at 5:51 PM

What a nice post to take me back to Marine Terrace. I lived in a flat in Marine Terrace from 1980 to 1982, while working for Halliburton at the time. I loved it there. I rented the flat from a family that had been posted in UK.

I've wonderful memories of my time there. I lived in
S'pore for nearly 10 years and left in January '85. I've recently bought a house and moved....will have to dig through boxes and find my address at Marine Terrace!

I am glad that I could invoke your memory of Marine Terrace. If you have taken any picture of the precint, send them to me and I'll send you the picture of same place but present time.

One thing that stands out when you do "then and Now" photos like this. The trees have grown and obstructed the view of the old buildings. Bad for us nostalgia bloggers, but good for the environment and I am not complaining.

I am not familiear the the East Coast Park of old and thus cannot remember this pond. But when my kids were young, we went to the West Coast Park often and there was a pond there as well. At least 'your pond' is still around. The whole pond at West Coast Park is now gone and replaced by a container port.

Thank you for sharing, Philip. Isn't it wonderful for us to blog on the theme of "Same Place. Different Time. Different Journey". Your treasure of memories and "memory aids" of earlier photos of more than most of us and others to inspire the experiences of the "youngonce" to pass on to younger ones. Cheers!

Pls don't mention it, Philip. I like this blog on Marine Terrace for same place, different time of fond memories from the family album.

Thanks also to Chun See for these collective memories theme for all of us to share. Cheers!

Philip. I notice that your old photos are still very clear and have none of the yellowish (sepia?) look. How do you do it?

I did nothing special to my old photos except keeping them in the albums.