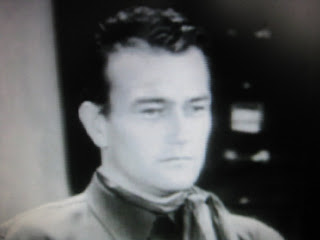 The handsome guy above was a famous actor and an icon in Hollywood. He acted many black and white movies before the war. He became famous only after the war. The above picture was taken from his 1933 movie. Most of you out there have seen his movies. Who is he?
Posted by PChew at 6:24 AM

John Wayne is his name ... a great actor.

Dan, you are right. The guy is John Wayne aka the Duke. I wonder how you could recognise him.
Chun See, thanks for trying.

Philip, I mentioned in my answer to your Teaser 4 - Gary Cooper in High Noon, that my Dad was an avid collector of old classic movies. I have viewed quite a number of the old cowboy movies.

In your answer to Teaser 6 -Handkerchief, you posted a photo of John Wayne, when he was much older.

I had watched, in the cinemas, some of his later movies from the 1960's onwards, which included The Alamo, Hatari, The Longest Day and True Grit.