In 1994 when I was in Ho Chi Minh City, I heard of the Cao Dai Sect in Tay Ninh District, Vietnam. A friend took me there in his car. It was about one and a half hour drive from Ho Chi Minh City to Cao Dai village. I was told that all the villagers were members of the Coa Dai Sect. As the car moved into the village, I could see many Cao Dai temples on both sides of the road. They were very colourful with unique architecture. Some temples had single tower (picture 7) and others with twin towers (picture 8). Their main temple (picture 1) was the largest of all.

The Coa Dai Sect believed in all major religions such as Buddhism, Toaism, Christinity and Hinduism. The Sect also worshipped influential and powerful people in their life times like Confucius, William Shakespear, Victor Hugo, Joan of Arc, Sun Yat Sen, red face Kuan Kong, etc. Foreigners referred to Cao Dai Sect as One Eye God believers because under the ceiling of the main temple hung a globe with one big eye painted on it (picture 3).

We arrived early but other tourists were already there. We were not allowed at the prayer hall. An usher directed us upstairs to join the others to watch the prayer ceremony. At 12.00 noon sharp members of the sect walked orderly into the prayer hall. They put on colourful clothing in groups from white clothes novices to red clothes elders. We did not know what was going on as there was no guide or interpreter to explain to us. We watched for while and left after taking some pictures. 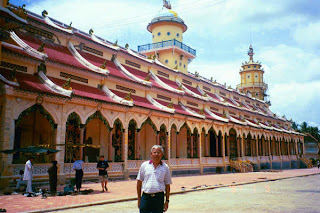 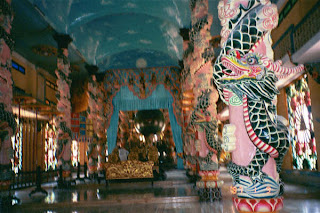 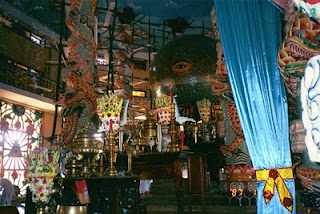 Picture 3 - the One Eye Globe 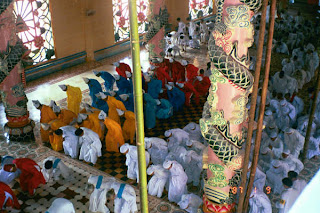 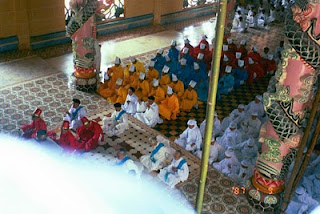 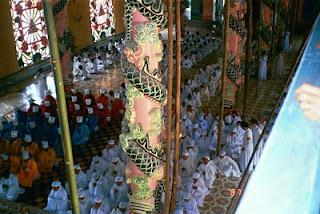 Picture 4-6 members of the sect praying 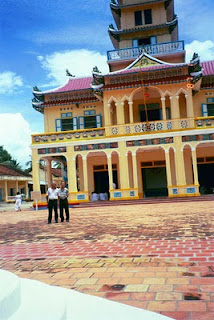 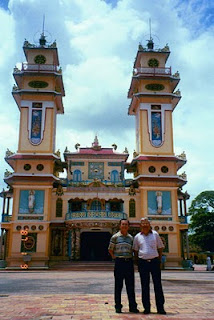 Interesting. I wonder if the members believed in the sanctity of all religions and philosophies, or if they were just kia-su and want to receive blessings from as many deities as possible! I'm sure most would be for the former :)

If I am not wrong, the Cao Dai sec was one of 3 big groups that caused the downfall of Emperor Bao Dai, thus paving the way for Ngo Din Diem to be President of South Vietnam in c 1956. The other one I recall was Bin Zuyen which controlled the drug/prostitution/gambling dens in Cholon District of Saigon.

I am not sure. But, I remember reading somewhere that the US army got the sect members to fight the Vietcong.